A Self Guided Walking Tour of Warkworth

Details make the difference and it could not be more clearly illustrated than viewing architectural elements on some of Warkworth’s finest buildings. Whether historic or recent, it is the Details that set these buildings apart. 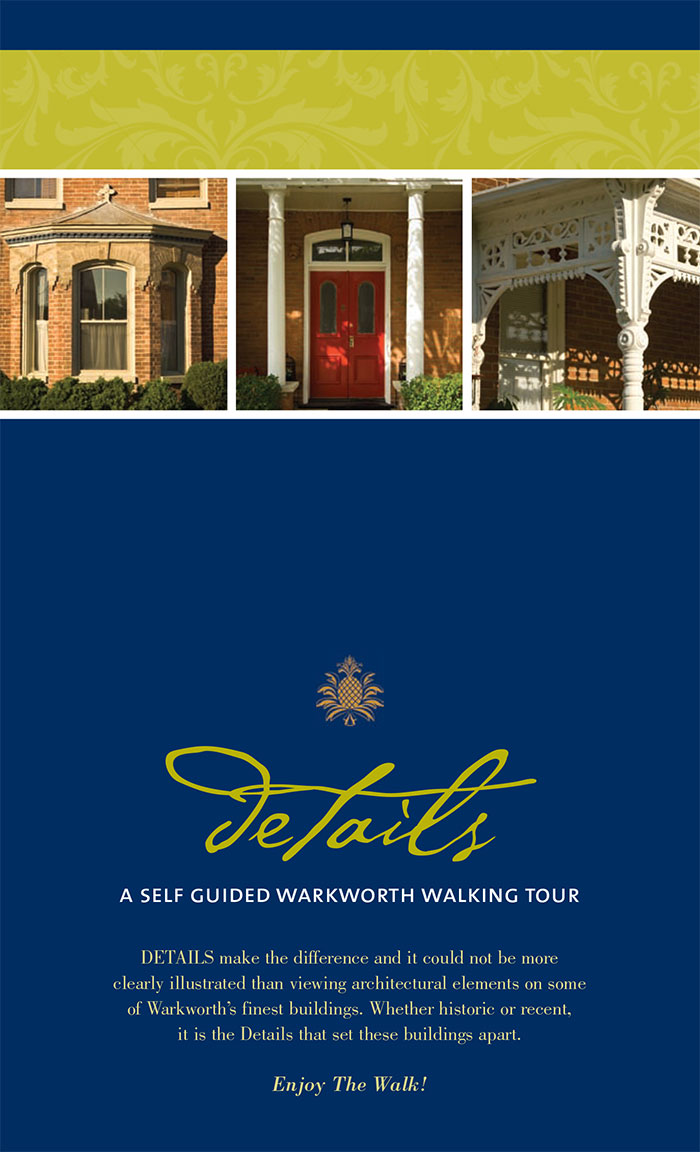 Click on the cover above to download the walking tour in PDF format or continue down this page to view the contents of the brochure.

Nestled amongst seven hills in beautiful Northumberland County, the village of Warkworth is part of a parcel of land originally purchased from the Mississauga First Nation in 1784 to provide land for United Empire Loyalist settlers.

Formerly know as Benfield, the name Warkworth was chosen in 1857 by a prominent early settler,and militia leader Major Henry Humphries who had served in the Northumberland regiment in England.

Today, surrounded by rich farmland and rolling hills, Warkworth’s location attracts the surrounding communities as well as a large tourist trade. A thriving arts community, heritage homes, friendly shop keepers and its array of activities have made Warkworth a destination.

This building exhibits features found onmany of its downtown neighbours. Under a boomtown mansard roof with pedimented and bracketed dormers we find a dentilled cornice and bands of contrasting red and buff brick laid in recessed panels and a course of horizontal corbelling.

The exuberant polychromatic brickwork combined with a wonderful sense of proportion and massing of elements makes this house one of Warkworth’s finest mid 19th century Ontario vernacular houses. Note how the buffbrick window surrounds and quoins are set proud to cast shadow and emphasize the decorative effect.

The Italianate glazed, double doors with transom, slender columns, inviting recessed porch with its upper gallery, combined with the verticality of the two storey bays give this charming house an elegant appearance and a wonderful sense of proportion. Note the twin next door.

Horizontal row of windows is frequently found elements in what is broadly termed “the prairie style”. These multi paned windows are set under a hipped gable that illuminate the loft. The bands of shingles cast shadows to give the wall texture.

This striking frame house with its projecting two storey bay window and elaborate verandah has an element in the upper gable that alludes to the king posts found in medieval buildings. Although their function was originally structural, its use here is purely decorative.

This Queen Anne Revival cottage is a copy book gem. Note the compound gable with its decorative king post and cruck arch (borrowed from medieval timber framing). The shingled bell cast gable is supported by a pair of plain doric columns and the bay window.

Arts and craft elements abound in this charming house. The cobblestone piers that support the verandah, and the front door and adjacent window are fine examples of the style. The decorative cedar shingles give texture to the wall surfaces and the overall massing of the building’s form gives it a picturesque silhouette.

Warkworth’s most impressive chimney. It’s imposing silohette with brick corbelling is an integral architectural element on this former Anglican church. It is also a lasting tribute to to the brick laying skill of the mason who built it.

The decorative bargeboard, or gingerbread trim in the gable is both whimsical and capricious and no doubt the original verandah treatment would have been similar. Note the arched windows in the attic and the diamond pattern in the brick between them.

A profusion of fretwork, spools and brackets with elaborately turned posts make this verandah and the one on the side integral design elements in the facades of this late 19th century house that also exhibits Italianate elements such as the brackets under the eaves and the hipped roof.

The panelled frieze under the eaves provides a band that horizontally ties together the architectural elements of this handsome early 20th century house. The pediment supported by fluted columns and thetwo storey bay window flank the impressive doorways.

This decorative verandah exhibits many features of the wood-workers catalogue. Fretwork, spools, brackets and turned posts give the house both texture and form. Note elements of the Italianate style such as the fine double doors and the brackets under the hipped roof.

This elegant Classical Revival portico with its fluted columns and engaged pilasters flanking of the front doorway were common features used by designers in the early decades of the 20th century.They were rejecting the “over the top” fanciness of the Victorians and looking for design elements that were more restrained.

The returned eaves, fascia cornice mouldings and corner pilasters demonstrate how modest materials used with a classic sense of proportion and design can and become part of the buildings essential character known as Benfield.

This house demonstrates a plethora of the Victorian woodworker’s vocabulary. Note the decorative fretwork, bargeboards and sculpted cedar shingles. The spectacular verandah sweeps across the front of the house and wraps around to follow the entire north facade.

This simple arched transom over the front door is a rare feature in Warkworth. Note the side doors in the projecting vestibule that would have provided access to verandahs that may have been meant to flank the entrance. This charming house is on a deep lot that extends back to Mill Creek.

The ornate verandah on the front of this buff brick Ontario vernacular house and the remnants of whimsical barge board decoration in the gable are testimonials to the original original owners who ran the local sawmill.

The lines and proportions of this formal portico are classic design.Note the shingled pediment with returned eaves that sits onsquared pillars with delicate capitals.

This verandah, with its bellcast roofline, simple brackets, champfered posts and cedar shingles, shelters one of the town’s finest doorways.The handsome panelled door is framed by an elegant transome and sidelights that would usually be found on a much grander house. Note the tulip cutouts below the porch floor.

Style and Grace
The delicate brackets and slender posts that support the wraparound verandah give this charming house, with its idyllic setting overlooking the millpond, a reserved sense of style and grace.

The gazebo-like verandah feature, with its paired columns, saw tooth fascia and ornate finial, is the focal point of this grand house. Constructed of faux stone concrete block, an early 20th century building material. Also of interest are the cast lintels over the upper windows with their stylized maple leaf pattern.

This 1940’s house was transformed in the 1970’s. The projecting gables were faced in field stone. The posts on the front portico are from the hurricane damaged Brighton town hall. The post next to the garage are from the fire damaged Warkworth town hall.

The eye catching octagonal window in the front gable and the elongated one on the east wall and west elevations are elements that make this charming house a picturesque example of mid 20th century suburban design.